Optical aberations in an Icy Cavern

I saw something in the lenses accumulating in my peculiar collection. Assembled in a row they guard the entrance to an icy cavern. Sometimes things small and ordinary become huge and overwhelming. Walk among the distortions and see if you can find yourself.

Expanding Cosmos in Half a Box

So I said to myself “You need to expand your universe”. Heck I need to create my universe. So I had a little spark of lightning and added a rocky planet, a moon in two phases, a sun with an eclipse, a gaseous planet with an orbiting exoplanet, innumerable galaxies (little white spots in the darkness), a passing comet, a place to stand and some clouds to dream upon. All of this collapses into half a box with a black hole at the bottom. Now the question is “Should I intervene?

A famished serpent appears to devour the sublime, bitty snake slithering on Euclid’s grassy plain. From a third dimension a snake charmer puts a finger in the bitty snake’s mouth and with no hesitation, turns a wheel and decapitates its bitty head.

Simultaneously the bitty snake grows a new body while both creatures deconstruct into four dimensions. A transient moment unfolds between two worlds separated by time and space. What has happened?

(The three dimensional snakes pop up rather dramatically breaking up with the background.

Just completed another kinetic sculpture named Baade's Window Gimbal. This is number 6 in a series. Pictures in my Blog show front and back view with almost innumerable options of faces and spacial orientation. 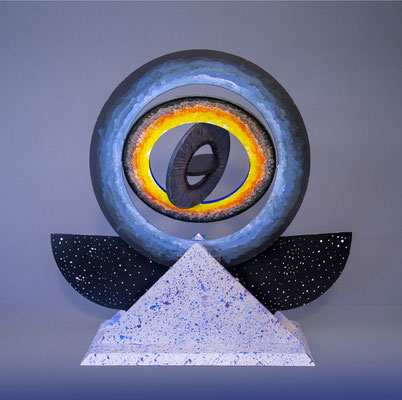 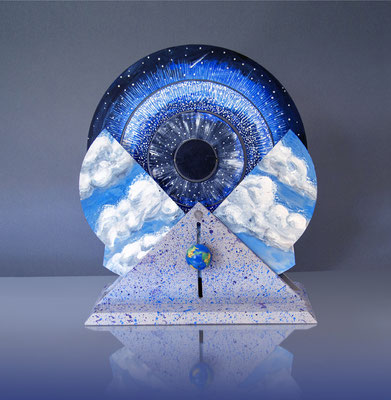 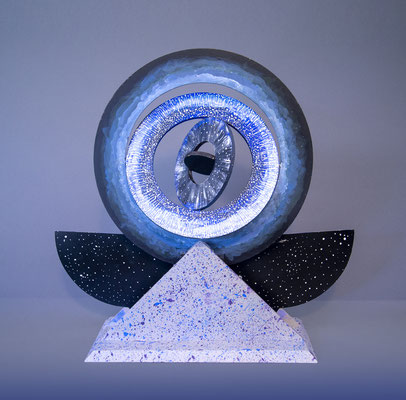 This video features a story about Plato's Cave and two separate pieces of art embedded in a kinetic Gimbal box..

This is my fifth gimbal art construction. In this iteration I have painted art on opposite sides of the same gimbal panel. The first art is displayed facing outward and mounted to cover a mirror box.  The viewer can never directly see the original art on the second panel. The second art is facing down to the reflective surfaces inside the box,. Similar to Plato’s Cave, confined viewers in a cave can only see the shadows of the real world. The reflection is an illusion where one could believe parts of the first panel painting’s circular separations are being reflected into the box.

This is my Third Gimbal Art. I have created highly reflective black and mirrored shapes on opposite sides. The effect is to intermingle the shadows from ambient light with the reflections cast from opposite sides of the gimbal.

Email: tim@bachmanarts4444.com (remove the four 4's) They are there to thwart spam robots